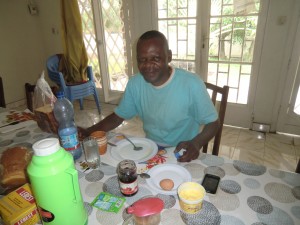 Yapeco our manager in the Congo Kinshasa

We spent the night in hotel Lulo in Kinshasa, next door to Nzo Binati. We took our regular breakfast consisting of oatmeal and ​​a mix of water and milkpowder. On top of this solid foundation, we had a well-cooked egg with bread. With such a hearty breakfast we won’t need a refill until late afternoon.

Yapeco, Gösta Luboyi and the driver Guylain met us at the airport last night and they have stayed with us throughout the day. First we went to see Tutondele, one of our salespersons of solar lamps. We did a thorough review of the current sales work and we sketched out new ways of working. We have hired two new salespersons in Kinshasa. They have a month to prove what they can accomplish. If they succeed they will get new assignments. We expect to be back here in mid-April in order to evaluate the sales.

At 5 p.m., we were invited to the Swedish embassy for a social event for us northerners. About 25 guests came and we had a pleasant afternoon on their patio surrounded with a well fenced and lush garden. The Embassy offered Swedish cream cakes and coffee. We met many interesting people and got some new contacts at the embassy. One man worked on the development of the cement factory in Lukala at Kimpese, and another man – an adventurer – had worked all over the world. Since 1995 he has been active in Congo Kinshasa, starting in the refugee camps of Bukavu after the genocide in Rwanda. Before we left the Embassy he told me that he had lived in Ulricehamn for several years during his childhood. There, he had attended the Sunday School of the Mission Church. The parents were members of the church. It was nice to know that he once had lived in my home municipality.

We also met security people and people from Swedish MSB, formerly SRSA, with responsibility for the safety of the Swedish UN staff. One captain worked with the training of officers within the UN. A military attaché gave a brief speech. He was stationed in Pretoria but his district was the whole of southern Africa, including the Congo countries.

We end the first day of our eighth Congo trip by making a summary in the form of this blog post. We are pleased if you have time to read our blog. We also appreciate your comments. Let your thoughts out and give them wings, and they will travel around the globe.

2 thoughts on “Cream cake at the Embassy”