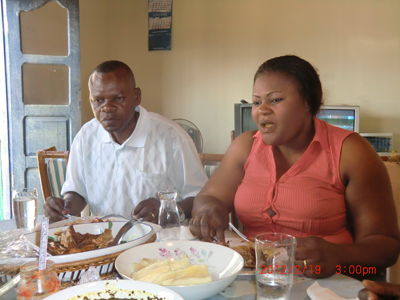 At home with Yapeco and Augustine

Sunday morning was started with the usual scoop shower. So far, we have had running water only once. Unfortunately, Lisanga is falling into decay. There is a need for entrepreneurs who want to make a change. When will they get the chance? Today, the gruel had become porridge, thanks to Julienne. We were happy to get real porridge. Bernt fixed the milk. He takes two sachets of powdered milk, pours them into a mug with water and stirs. It tastes remarkably well, almost as good as the milk of an ordinary Swedish cow. Bernt easliy shifts from being the waterman, like the other night, to the milkman, at breakfast.

At 9.00 am Yapeco came to get us for the service in the Baobab Chuch. We were early, and we sat down outside in the shade, awaiting our turn. The first service ended by 10 o´clock and was held in French. The service we attended was in Kikongo. The chairman of the congregation, Damas Ngula, directed the services. Pastor Matthieu Diangitukula took care of the clerical assignments. Bernt was the preacher of the day, interpreted by Julienne. He talked about the necessity of being born again, and he based his sermon on Nicodemus´ discussions with Jesus. We must rethink and think again. We must leave the old thought patterns in order to create something new, we must leave that which prevents development. In this way, Bernt also delivered some truths about entrepreneurship from the pulpit today. When will regeneration come to our churches and our societies? Lack of money is not the big problem, the big problem is the inability to think outside the box.

The Congolese service has many items on the program. Five choirs sang, pastor Matthieu led the intersession and prayed in particular for those who had decided to tithe to the church. He talked about the importance of the friend churches and touched upon the things we can do together, Blidsberg, Hökerum and Baobab. He asked us mondele to come to the front of the church, and Yapeco introduced us to the congregation and gave them a thorough description of MSG. Most people recognized us already since this is the third service we take part in. And about a year ago, we were in the Baobab Church to show slides of a winterly Sweden.

Two couples came to the front with their infants for baby-blessing. The collection was done singing and dancing, and the offerings were put in three baskets. The contents of one of the baskets was specifically meant for the needy. The other two didn´t have taget groups, but one was used by the male givers, and the other by the female. Many people put money both in the basket benefiting the needy and in the basket of their gender.

There was also a communion ceremony today, and just like collection, it was done walking, singing and dancing. It was dignified, substantial and rewarding. After communion, the whole congregation stood up and they all sent their greetings to us and to Sweden by raising both their hands, loudly and cheerfully. I thanked them for the greetings with a “Tutondele” (“Thank you very much” in Kikongo) and promised to bring the greetings to Sweden. After the service we shook hands with a large part of the congregation, and there were pictures taken.

At 1.30 pm, Yapeco brought us and the pastor with him home in his four-wheel driven Toyota jeep. It is almost impossible to go to Yapeco and Augustine in a vehicle without four-wheel drive. At Yapeco´s house Damas Ngula joined us. Augustine had cooked dinner for us. She had prepared chicken, fish, different dishes with manioc, rice, beans and sakasaka. For dessert we had a fruit salad made of papaya, bananas and pineapple.

When we had returned home we took a much longed-for nap, and then there was miscellaneous desk work and preparations for the extra class tomorrow with the entrepreneurs on the program. When I was going to publish this blog the first time, my poor mobile broadband had packed it in. This is the third time it gives out during this stay. I have probably sent and received too much information. There are presumably limitations that I have yet to understand. In the early Monday morning, the broadband was unexpectedly working again. It had changed it´s mind during the time I had been asleep under the mosquito net.