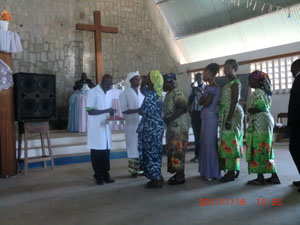 On Sundays, the breakfast is served half an hour later than on weekdays. Hence, the day began with breakfast at 8.00 am. We went to Yapecos office to publish the blog to keep you, our readers updated, and also to read and send e-mails. At 9.30 am, we set off for church. Today, the service began at 10.00 am. The order of the service consisted of 23 points in good orderliness. Point 10 was our presentation. Bernt, Julienne and I went up to the platform and the congregation greeted us with a ”Welcome”. Yapeco held an exhaustive talk about us and our entrepreneurial project. The Congolese certainly knows how to go into great detail. I had greetings from Hökerum to the Baobab Church, and I told them how cold it is in Sweden right now, and the amount of snow we have received. Later that day, I heard that the temperature had risen considerably in Sweden. But on a distance of 7 500 kilometers and in 30ºC it is very hard to predict such a sudden change of weather in Sweden. I also had the whole congregation say ”Hökerum”.

Point 14 was Bernt´s, as he was today´s preacher. Julienne translated the sermon to kikongo. He talked about Sweden´s path from poverty to welfare state, the role the revivalism played during the 19th century and how democracy gained more and more ground with ordinary people as modern society was founded in the beginning of the 20th century. It is the ordinary people in a democracy that makes the difference when it comes to putting the rights and obligations to the test. When you work and when you take responsibility for your family and for other members of society, that is democracy in practice. Bernt´s point went home, and was further more boosted by the reinforcement of Julienne´s translation. Several times during the sermon, the congregation cheered ”amen” or ”hallelujah”. There were other exclamations as well, but as I don´t know how they are spelled, we will have to leave that open. On the whole, there were no dull moments whatsoever during the tree hour service. All Swedes should be given the opportunity to take part in a Congolese service, the atmosphere, the feeling, joy and devotion is fantastic. Bernt got long applause and some whistles. After the service, Yapeco said: ”Bernt is the best evangelist.”

To experience a similar joy and devotion in Sweden, you would probably have to be on home ground when Elfsborg shoots the winning goal in the final of the Premier Division of the Swedish Football League.

During the service there are many opportunities for prayers, and after the sermon the congregation prayed for its spiritual message. Then, it was time for collection. The Congolese dance their way to the front of the church, moving in step with the drums. The drums are important and together with a lot of other rhythm instruments the sound is amazing. The women are also beautifully dressed. Today, the organ was not used. Damas was choir leader. Collection started with fifteen people gathering around Damas at the altar. Damas prayed for them and shook hands with each of them. They were church members who had promised to give a tenth of their salaries to the church. After this, ten churchwardens took their stands at a table at the front of the church, each of them carrying a basket. Every member of the church belongs to a group, and they put their contribution in the basket of that group. Bernt´s and my basket was white, but there were many Congolese who put their money in our basket. It was very considerate of them. If they hadn´t we would have been disgraced by the tiny sum in our basket compared with those of the other baskets. We ”whiteys” were only 2, and the Congolese were somewhere between 300 and 400.

Then it was time for the Holy Communion. Damas administered the sacrament to us first, and then to those who would administer the sacrament to the congregation. They were dressed in white. Once again, the whole congregation walked in procession to the front of the church. Afterwards, we had a short meeting with the Global Group, and Damas signed our friend relation agreement between the Baobab Church and Covenant Churches of Blidsberg and Hökerum. I will bring the agreements back to Sweden for countersigning.

We had a dinner invitation to Damas and his wife, but it seemed to be the Global Group that was responsible for the food. They joined us for dinner. The meal consisted of chicken, rice, manioc and beans and it was very tasty. Then, Yapeco drove us to the Guest House, and we took a good long siesta. Today has been really hot. We have 30ºC in our room right now, at 9.30 pm Sunday evening. Today must have been the hottest day up until now during this stay.

In Congo, the memory of President Lumumba, who was assassinated in the sixties, is celebrated today. Tomorrow, Monday January 17th is a holiday in remembrance of president Kabila who was also assassinated.

2 thoughts on “Service in the Baobab Church”