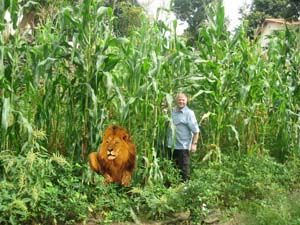 The day began with a thunderstorm, the lightning and the heavy rumbles were all over the place. When the rain gradually started to fall, the thunder died down. We sat down on the verandah to say our morning prayer. The pouring rain contributed to a very pleasant temperature. After breakfast, we met pastor Batinisa. He is in charge of all transports of CEC, and among other things, the lorry is his responsibility. Bernt has inspected the lorry and recorded the defects he could discover, and there were many. Boudda, the driver of the lorry, helped Bernt with the inspection.

At 9.15 am, we went to the Swedish Embassy for a meeting with the embassy secretary Andreas Magnusson and Daniel Tiveau, who is in charge of agricultural issues. We informed them about our activities in Matadi. Daniel has been working in African countries for 12 years. He told us that Congo is difficult to work in compared to other African countries. Congo has more bureaucracy which delays any decision or result. When it comes to agriculture, the rich soil of Congo can give several harvests a year. There is in other words a tremendous potential. Daniel Tiveau will send us the Congolese laws and regulations concerning loans. It felt good to visit the embassy, and both Andreas Magnusson and Daniel Tiveau had a very positive attitude to our project. They gave us good advice, wished us success and told us that we always are welcome to the embassy. We got their emergency number to use if something unexpected would happen.

We paid a visit to Diakonia, to tell them about our doings in Congo. They informed us about Diakonia´s activities in Congo. Their work focus on three areas: human rights, democratization and equality between women and men. We didn´t have time to go into detail in any of the issues. I got the opportunity to use their computers and publish my first two blogs. Unfortunately, their computer didn´t accept the website of Borås Tidning, so I couldn´t upload the blogs to bt.se, but I hope to be able to do that tomorrow at Emy´s office here in Kimpese.

After lunch at Nzo Binati we left Kinshasa for the 220 kilometres ride to Kimpese. The first part of the trip I took a nap, but little by little I woke up realizing that we were going faster and faster. Fistom really stepped on it. After a while I said to Bernt that the speed was too high. Now and then we touched upon 130 -140 km/h. I urged Fistom ”slow down, slow down” and he slowed down for a little while, but soon we were going at the same speed again. After a swerve that saved us from crashing into a meeting car, we were driving in the right ditch for a while. I again urged Fistom to take it easy. Next, he was a hair´s breadth from ramming a lorry as he – again – took a short cut in a left curve. In such a situation, it is crucial to mind your P´s and Q´s, and luckily for us, he did. We learnt the lesson that it is better when the driver and the passengers have a common language. But we still think he understood the essence of what we were trying to make him do. And he exposed both us and his fellow road-users to great danger. Bernt fell asleep and claimed that Fistom´s reckless driving didn´t affect him. But he certainly woke up when we were driving in the ditch, and the car was jolting more than usual. We passed many pedestrians, mostly children and women with heavy loads of food and fire wood. Fistom showed a degree of carelessness that shouldn´t and can´t be tolerated. We will not have him drive us again, that´s for sure. Unfortunately, there are too many drivers that share his attitude. The landscape is green and beautiful now, and the journey could have been pleasant if we had travelled in a more law-abiding way. It must have been the protection of God that got us safe and sound to Kimpese.

In Kimpese, Emy and Julienne welcomed us at the Guest House. We had a delicious dinner and very nice dinner company. We were speaking in Swedish, French, English and Kikongo. And it seemed as though we all understood each other just fine.