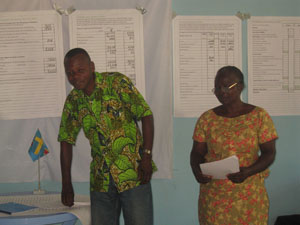 During this week, Bernt and I have been feeling sick. Our stomachs haven´t agreed with the local bacteria. We´ve been forced to pay quite a few speedy visits to the lavatory. We have been in such great need of toilet paper that we´ve had to ask for an extra ration. Luckily our request was granted, and we agreed to always have a spare roll in our room. Bernt had brought Imodium Plus tablets and I took most of them I´m afraid. Bernt´s symptoms have been less severe than mine. In the afternoon I asked Yapeco to call a doctor as I felt worse; I was in pain and felt generally weak. He got hold of Dr Philippe at the IME hospital. Dr Philippe asked me about my symptoms, and told me that I had it mildly, as I neither had thrown up, nor had a fever or a headache. I was prescribed medicine though, which I have been taking according to his orders. Daily, I take 1 Lopradé, 3 x 2 Clamoxyl and one litre of water mixed with Davisalts. The medicine has worked. On Thursday morning he wanted to talk to me again, and I could inform him that I felt much better. Friday afternoon, we are going to see Dr Philippe at the IME hospital to find out whether or not we are fit to return to Sweden. As luck have it, our ailments have not immobilized us. We have been able to carry on with everything we had made plans for and more.

Today, the entrepreneurial course have dealt with making budgets, which in summary is about transforming your ideas into numbers. Financial planning is the most important part of the course. I had prepared the class, thinking that we would use the computer, projector and the big screen. But the guy who owns the cable we had used to connect my gear to the power point had forgotten to bring it. Or perhaps he had been told that we wouldn´t be using it any more. An hour later, Samuel had fixed another cable. He put the naked copper wire of one end of the cable in the power point, thus providing us with electricity. But by then, we were using the flipcharts that we had used in October, and they worked splendidly. The absence of digitality was not as severe as we had thought. Julienne held the lecture on promissory notes, guarantees and the business loan regulations all by herself. It is very good that we don´t tire the entrepreneurs with our Swedish unless we have to. If Julienne forgets something Yapeco fills in. The Youth House is perfect for our courses. Only sudden cloudbursts reduce its usefulness. The Support Group have decided that we won´t have to pay any rent.

In the afternoon, we visited Muditu again and this time in his home in Matadi. He has built the house himself, beautifully situated on a hillside above the Congo River. At the moment, his wife Josephine is staying at their other house, nearby their fields, but at Muditu´s home we met five young people. Two of the boys were related to him. They had come to help on the fields, but one of them got sick. No help from them. The three girls, who were between 15 and 20 years old, are orphans living with Muditu and Josephine. Muditu used to work in the harbor. He was the manager of loading and unloading. He is now 67 years old, and has a great commitment to social issues. In his spare time, he works with family therapy. He and Josephine have seven children; all of them have left home. He is one of the driving forces of the Youth House. We sat down in his livingroom, and were entertained with Coca Cola, buns and peanuts.

On the way back, we called on Yapeco, at his hotel building site. So far, he has laid the foundations which he financed with private means, $77 000. He needs a loan of $237 000 to finish the building. The location is beautiful above the river. I am sure it is a good object of investment.

The only thing we are dissatisfied with is the contact with the bank. We didn´t get where we intended. Yapeco has been all over town to find other banks for us to contact. We need a bank that we can count on, and it is a matter of principle that the bank shall put up a loan of the same sum that we do. We are still waiting for the bank to cash in the cheque we brought of $25 992.