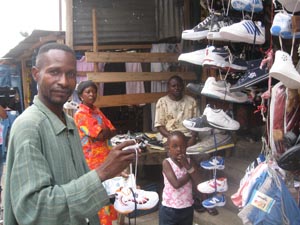 In the morning, I corrected some of the blogs I had published yesterday, and the Hökerum website also got a few updates. I could do this thanks to Gunnel’s mobile internet connection which worked surprisingly well. We had breakfast at 6.30 am, and then we put our bags in the bus. Samuel Nkailu and wife presented us with a big cluster of bananas, which we enjoyed during the trip. The reverends Damas Mangikulua and Axel Biongo were there together with Mudito to say goodbye to us. Axel held a speech to us and gave us two gifts, one for the youngest and one for the oldest in our group. The gift was a beautiful little work of art with a memorable text on it. Jenny and Kerstin were the lucky recipients. After all photos had been taken, and Damas had prayed for us we set off for Luozi.

The first part of the road was paved, but when we had 90 kilometers left, the route turned into a muddy dirt road. This distance took 4 hours. It had been raining a little during the last day and night, but the red dust of the African red soil made itself felt. There were thick layers of dust everywhere, and we were almost as red as tomatoes when we arrived at our destination at 4.30 pm. At the ferry berth we had to wait for about an hour. Bernt spent the time having Sunday school with the children who were around; he sang with them and took pictures. When the Sunday school class was over, Bernt was drenched with sweat. But down by the river, Lars-Ola heard a little girl singing the songs Bernt had taught – they were catchy. We boarded the ferry by foot, sandals off, wading through the water. It was pleasant and extraordinary to dip our feet in the Congo River.

Lendo received us with open arms and dinner on the table, a wonderful reception after a day on the road, covered in sweat and dust as we were. Kerstin, Jenny and I stay in one of the apartments in the semidetached house where Gunnel occupies the other part. We live like royalties. The electricity comes from above, from solar cells. These lines are written by the light of a solar cell lamp. Outside, it is pitch-dark, and I can hear a low rushing sound from what I think is the rain. Tomorrow, in the daylight I will know if it has been raining. The running water was fixed just before we arrived. But the shower is still a 150 l water barrel, and you work it by scooping up the water with a ladle. Most of the dust gave in to this treatment.

At night we were invited to Gunnel together with Robert Diabanza. It was very interesting for us happy novices to speak to a Swedish-speaking Congolese, with one foot in Congo and the other in Sweden. Robert is born in Luozi and knows everything about local customs, traditions and ways of thinking. He is married to Ruth from Närke and they have three children, all of them living in Sweden at the moment.

Some thoughts from the road: Everywhere we go there are enormous areas of wasteland, soil that produces nothing more than a little fire wood for cooking. Often we see women with loads of sticks on their heads, or in a basket on the back. I saw a woman the other day, who was a true champion in regards to what she was carrying. Her basket was heavily loaded with thick sticks, and the distance from the ground to the top of her load was twice the height of the woman. A question arises – where are the men? There are only a few of them around. This must be a system error!

Robert tells us that the large areas of wasteland have been forested. Belgian forest companies have pillaged the woods, and left the areas barren. Large amounts of high-grade wood went to buildings and furniture in Europe. This is a scandal! The international court in Haag should impose upon the pillagers to plant new woods. There might be a chance though that the court is challengeable. Other measures are needed to put things in order. The UN might be a solution. On the whole, all ravaging of natural resources during and after the period of colonialism should be compensated.

On the way to Luozi we passed a village where one of the forest companies had established a sawmill. Most of the houses were built in wood. But when the forest around the village had been harvested, the sawmill closed down. Left in the village are ramshackle houses, not suitable for human beings to live in, a result of ruthless exploitation. If the forests had been managed in a responsible way, this village would still have a sawmill. And this would have provided work and income and another standard of living for the villagers.

Who owns the land? The family is the land, which means that there is no personal responsibility and the ownership is collective. As a result nobody cares about the land. System error! Most development in this world comes from personal initiative and personal responsibility. A reflection: Peasant proprietors could be a key to a better future. Robert is an entrepreneur himself. He has a 20-year-lease of 125 ha two hours from Luozi. He has planted oil palms and acacias, and he has both a plant nursery and a hydroelectric power station of his own. We are going to meet Robert again; I will tell you more about him tomorrow. Now the gnats are attacking and it’s time to head to bed. The computer screen has become a recreation area for these little creatures. Back to the safe world under the mosquito net.