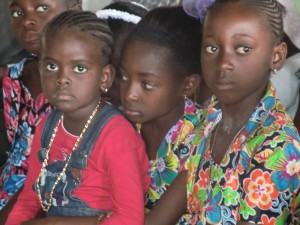 The children in Baobab church

The day started well with oatmeal. Afterwards, we went to the Baobab church. When we got there 9:30 a.m. the French service was still going on. At 10 o’clock the Kikongo service started. The past week has been “The children’s week” and the service was directed to the kids. Today, Sunday School was attended by about a hundred children. The children sang in choirs, led by young girls. They read Bible verses, including the Ten Commandments. By heart, they said the names of all the books of the Bible. Those who knew the most by heart got extra applauses.

As usual, the service contained many elements and each element takes time. Bernt and I step up to the podium and greeted everyone from Sweden. When we left the church by 2 p.m., the service was still not over. In the service, a women talked about the situation of children in the Congo. She stated that there are two million children who receive no schooling. She had so much to say about the kids in Congo that she had to be interrupted. Certainly, she talked on an important subject, but less is more. The Congolese are sometimes very verbal, the words just flowing. Outside the church, people were preparing a meal for the children. It had been a service with a lot of spirit and much contact between the speaker and the audience, which makes the service lively

When we came home, Augustine had dinner ready. We had a tasty meal and rested one hour. Then we had a good conversation with Yapeco and Augustine. She told us about her plans for the poultry farm. She has started again with 150 chickens and intend to build up a new establishment. I think she is better equipped today, considering the experience she has gained from her earlier poultry farm. Together, we will go through the projected profitability of this business. We will do a production cost estimate. Yapeco also reported on his activities. Tomorrow, we will take make an inventory of his stock and continue the review. An open and positive meeting to be continued.

Then, Augustine served citronella tea with mikati, a deep fried bun, and mankondo, a sliced ​​deep fried banana. We were visited by Mituzi and his five-year-son Glody. He works on the Nsanda estate. They had coffee with us. Then Mituzi took 20 cans pili pili, which he placed on his head before leaving us on foot. He will sell them at the market. Nsanda Group has a pili pili stock here at the home of Yapeco and Augustine.

2 thoughts on “The children´s week”