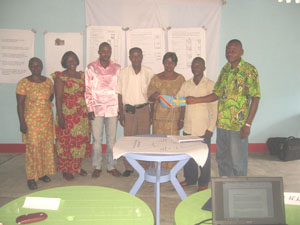 We had a pleasant stay and got a sound sleep in Kimpese. The temperature is more agreeable here than in Matadi. As far as I can understand, Matadi is one of the hottest places in Congo. It rained for a while during the night, and that makes the climate nicer to a Northerner. After getting up, we packed our bags for the journey home. It´s important to pack the clothes and things in the right order to have easy access to sweaters and coats when we come home to a much colder climate.

When Emy and Yapeco met today they greeted each other in Swedish: ‘Hur mår du?’ ‘Tack, jag mår bra.’ (‘How do you do?’ ‘I´m fine, thanks’) Both of them have been to Sweden several times. Now, Emy is hooked on starting an entrepreneurial course in Kimpese. We discussed the criteria Yapeco has used when he´s chosen the participants in Matadi. Emy is going to cooperate with Yapeco, they seem to know each other well. Before leaving IME, we paid a visit to Roger Olahema, the manager of the hospital. By ten o´clock we left for Kinshasa. Roy, a friend of Yapeco went with us. He is a happy and talkative guy. Our impression is that most Congolese are easy to make contact with; they are generally talkative and use a lot of body language. If they know English, they are happy to speak it. And Roy knew English. More and more Congolese speaks English, and it´s a status symbol to be able to. As we sat in the back of the car, we watched Yapeco and Roy talking to each other. By the intensity of their voices you might have thought that they were rather agitated from time to time, but that was probably not the case. It is just the way they express themselves.

Bernt and I summarized our experiences during the two weeks that had passed. Our message about financial planning has been swallowed hook, line and sinker. It remains to see if they are able to put it into practice. We have received much appreciation and great openness. They are disappointed that Sweden to such a large extent has abandoned them. They want us to come back and help them improve their community. The Covenant Church has been present in Bas-Congo for 130 years, and hundreds of missionaries have worked there. Muditu named the missionaries who´d lived in the house in Lisanga, Matadi, where we´d stayed. Among others were the previous pastor in Hökerum and his family. It is time to increase the signs of our solidarity again. There are many opportunities to make contributions to schools, health care and businesses.

Some of the opportunities are: the Baobab Church which would like to run an entrepreneurial program in their Secondary School, which is the equivalent of our upper secondary school. The Adult Education School that corresponds to the Swedish ‘Komvux’ also wants to start an entrepreneurial education for the students in addition to the three years of adult education. Julienne and her husband own 315 hectares of fertile soil that lies untilled, and they lack the means to get new cultivations started. Several new batches of entrepreneurs are queuing up for courses and for help to get started with a business. Emy wants to start an entrepreneurial course in Kimpese, and on several other locations in Bas-Kongo there are people who want to do likewise. Recently, we received an invitation to arrange courses from the Katanga province. The need for education and help to get started, that is loans, are great. We have also discovered a need for instruction in the English language.

There are two things I regret I didn´t do, says Bernt. One day we passed a barefooted young woman on her way home from the field to her village, 7 kilometers away. She carried a heavy basket filled with vegetables and firewood on her back. Yapeco stopped her, and bought some corncobs from her when she´d put down her basket. When the deal was closed, both Muditu and Yapeco had to help her lift the basket back where it belonged. With the sandals on her head and a happy smile, she continued her walk. What we should have done, says Bernt, was to have put her basket in the car and offered her a lift. But maybe that would have been impossible, the car and consequently the decision wasn´t mine. The second event that I regret happened one evening in Matadi, he continues. Yapeco had left us to run some errands, and a street boy came up to the car, asking for a few francs to buy bananas for supper. He didn´t get any francs even though I had many of them in my breastpocket. It would have been so easy to give him the means to satisfy his empty stomach. I made the wrong decision, says Bernt, and I regret it.

When you have read our blogs depicting our weeks in Congo, I hope they give you something to think about. The stay has certainly given us a lot to ponder upon. We have gained a better perspective on life and what we surround ourselves with. When we meet people in a community like Congo we are forced to make a choice. We choose either to ignore them – we might think that they have themselves to blame, and that everyone has to set one´s house in order. Or we might reflect upon the fact that we are a part of the global community that allows the Congolese to live in such poverty. Could it be that we owe them something? I hope our blogs can give you an answer. Thank you for your commitment. It makes it possible for us to carry on the work.

2 thoughts on “The choice”