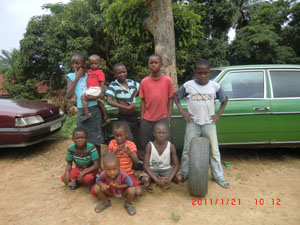 We have reached the last day in Matadi. We got up at 6.00 am. The coldness of the shower both gets you going and makes you shorten the duration of it all. We packed our bags, rested for a while and had breakfast. I printed out the last documents, cleared the desktop and returned the printer. A group of children have been playing football outside our house during our stay. We´ve gotten quite familiar with them, and taught them to say hello in Swedish: ‘Hej hej’, and raise their hands. Bernt handed out pencils to them the other day. We made them queue up orderly, and Bernt handed over the pencils one by one. When they saw that we were leaving, they gathered around us and said ‘Hej hej’. Samuel Nkailu and Muditu came to say goodbye. Samuel gave us a beautiful knitted gift yesterday, and today, Bernt got a knitted sweater for one of his grandchildren, made by Mama Matila. Bernt withdrew money with the VISA card so that we could pay our expenses at Lisanga. Yapeco went to withdraw money from our account to cover costs related to the entrepreneurial course. It took one and a half hour to get the money. The bank employees claimed that they had problems with the internet connection. In Congo, as well as in Sweden, you can always blame the computer when things don´t work.

At half past eleven, we set off for Kimpese, which is 120 kilometers away. Muditu prayed for us before we left. Bernt and I sat in the back of the car and we slept parts of the journey. It was hot, which didn´t make the sleep very comfortable. It´s a beautiful part of the country to travel through. There are steep hills and deep valleys. The first part of the distance is almost like a fjeld landscape, the road winding its way over the green hillsides. We stopped at a road toll station. There, a crowd of sellers almost caused a solar eclipse in the car. Our desire to buy things wasn´t at it´s best. It felt safe to be in the hands of Yapeco. By three o´clock we came to Kimpese. Now, we had to find someone who would drive the 100 kilometers to Luozi, to make sure that Julienne got home. It took us ten minutes to find a group of people who were going there. They had a pick-up truck and the loading platform had a tarpaulin cover. Two planks were fastened between the flaps to sit on. Julienne had bought a 25 kg sack of rice in Matadi. Bernt carried it on his head from our car to the truck. That caused much excitement; imagine a ‘mondele’ carrying something on his head! There was cheering and applauses. Julienne got to sit next to the driver. Around us, there was a brisk trade and lots of people. And all cars were crammed with people and goods. No empty transports here.

We settled in at the IME Guest House. Dinner was served, and afterwards we took a shower and a good long siesta. It is wonderful to stay here, it´s a quiet and peaceful place. At nightfall, we sat down on the veranda and philosophized. After a while, Peter and his wife joined us. They are good friends of Yapeco, and Peter is the principal of the IME School. He speaks English, and he helped us sort out some misunderstandings. Later on came Dr. Philippe. He was going to check in on our health. We told him that we felt well. He concluded that we were healthy enough to go back to Sweden.

We spent a couple of hours in the pleasant Congolese evening conversing. We talked about enterprising spirit and development in Congo. We agreed that if Congo is going to evolve, the Congolese need to change the way they think and learn how to plan. A modern society call for planning and the ability to think ahead. The widespread corruption and the far-reaching irregularities are curses that must be thoroughly uprooted. They throw spanners into the works of a sound progress. The fact that Congo is still on the same old spot, or even going backwards, is in the first place an issue of mentality, not an issue of funds. Lack of funds is a result of systematic mistakes. If you are ready to give up your old ways of thinking, and think something different and new, then change will come. The youth understands where the problems are, and they want a change. They are the hope of Congo and change will come, you may rest assured. The situation is comparable to that of the Prodigal Son; in his misery he awakened and made a decision to change his life. Another problem is that the educated and skilled people move abroad to find a more comfortable life. It is understandable, but they are needed in Congo, and it is in Congo that they can make the greatest contribution to humanity. To a great extent, the world around is accessory to the situation that Congo is left in. Ruthless exploiters have abused the inability of Congo to defend its interests. When strong global financial forces are at work, the law of the jungle takes effect.

Dr. Philippe told us that he is an entrepreneur too. He is building a guest house for tourists, and will open a tourist agency. He wants to pay attention to things worth seeing around Kimpese. He is also a fishmonger.

2 thoughts on “The countdown”