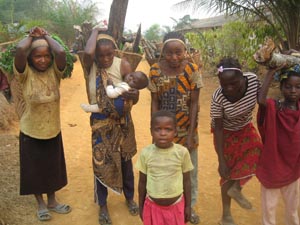 Congo-Kinshasa, or the Democratic Republic of Congo which is the real name, is a big country – five times the size of Sweden and the 12th biggest country in the world. The country has a population of 65 million people. Amongst the 195 countries in the world the Congo ranks number 19 in population size. The Congo has large natural resources. Best known is the copper in the province Katanga, but the country also has diamonds, cobalt, gold, cadmium, oil, silver, zinc, manganese, tin, germanium, uranium, radium, bauxite, iron ore and coal. Timber, high-grade wood, palm oil and rubber are extracted from the forest.

Rwanda and Uganda currently export stolen coltan from the Congo to countries in Western Europe and the USA and China, where the ore is used to extract tantalum which has been used in high quality electrolytic capacitors since the 60s. These are today used in for example mobile phones, PCs and DVD players.

Coltan is considered a contributory cause to the war in the Congo, a conflict that has led to approximately 4 million dead. Those of us who are consumers of mobile phones, computers and DVD players play a part in financing the war in eastern Congo. In this war Swedish weapons can also be found. The people who work in mines or in other places where this ore is extracted work under slave like conditions and they often have to carry the ore long distances. At given places trucks and even helicopters that carry false UN flags come to pick up the ore. The coltan belt is in a state of war and horrific atrocities are committed. Rape is widespread. For example are men with HIV contracted by the army, equipped with military equipment and weapons and given the task to rape as many women as possible.

The Democratic Republic of Congo have considerable potential for becoming a prosperous country, but many years of war and corruption have dramatically impaired the economy. We have to become aware of what is going on in the Congo. We play a part in many of the Congo’s problems. The Western World buys these important minerals and supplies them with weapons. The Congo concerns us all. All Congolese people must get the chance to benefit from their country’s wealth. The Congolese are one of the poorest people in the world. Your reaction, contribution and effort can make a difference.

1 thought on “The Democratic Republic of Congo, the rich country with the poor people”