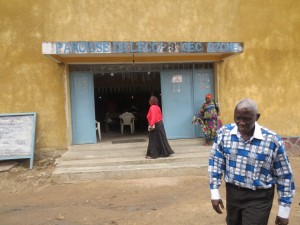 Entrance of the CEC church we visited

Today Augustin, the driver, drove us for the first time. We went to church in the Toyota belonging to the Church director. It was not an easy place to go to in a large car. There were market stands on both sides of the road and a lot of people walking in the street. The last part, we had to take a very bumpy narrow road and we arrived at the church at exactly 10 o’clock.

The service had probably begun before 10, and now, the sermon was in full swing. The generator was making noise outside but it couldn’t supply enough power for the speakers and they gave up. The preacher went down from the podium, so that the congregation would hear him, but we sat so far back we didn’t hear anything anyway. At the end we were invited onto the stage for a special welcome, together with Yapeco and Augustin. Nice!

We talked to several people afterwards, among them a man who gave Yngve shelter once when Yngve was sick. Now Yapeco’s son Stig rents a room in his house, and Stig gets to drive his car. We talked to Yapecos sister and her family. Hellen speaks English. Furthermore, two elderly ladies came to say hello. They visited us in Töve together with seven other Congolese in March 2011.

It was delightful to be in a room with a fan. We believe it’s forty degrees now. A young man, Horly Tsasa Nkayilu, wanted to speak to Yngve. He is the grandson of Samuel Nkailu. Horly is the director of an insurance company in Kinshasa called Papa Social. The company offers its 15,000 policyholders free health care. Papa Social collects insurance fees through the telecom operator Orange. If a parent buys phone services for at least 5 USD a month, the whole family is insured. The limit is five family members, ie two parents and three children. 15% of telecommunications fee goes to Papa Social. Horly is seeking partners in European countries. Today, he had an English-speaking interpreter with him.

At 3 pm, Augustin, Yngve and I ate at our usual restaurant very close to Nzo Binati. We want to be sure that we can tolerate the food. So far, we stick to french fries. We get a good helping of salt too. As we waited for the food, Yngve practiced saying the numbers in French. He got approval from Augustin on counting to ten. In the same fashion, I practiced the French names of the days of the week.

Yapeco missed our meal for a football game, but later in the afternoon he remembered that I like to have bananas on my bread. On the plastic bag is the picture of Obama with the text “America’s first black president.” It is the rainy season now, and in the afternoon we had a tremendous thunderstorm.

Now we are resting, and looking forward to a new week.

2 thoughts on “The heat rises”