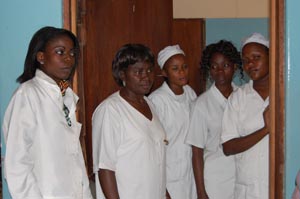 During breakfast Emy (the guy with the street kids) told us a story with a happy ending:”I met a guy the other day that I thought looked familiar. I walked up to him and started talking to him. It turned out that he was a former street child that I had worked with. When I first met him he was known for being rowdy, difficult and a skilled thief. Today he is an upstanding police man and he told me that thanks to the help we gave him he was shown a different path and learned what’s wrong and right. A nice result of Emy’s work.

After breakfast we walked a few hundred meters to the IME-hospital. The head of hospital Dr Thea Luzaisu received us and gave us a brief introduction. We handed over a donation from David Norén. It was a result of photos that he took in The Congo last year and had sold. The whole photo collection is on his website: http://davidnoren.se. We were guided around the hospital grounds by Emanuel Milango, one of the administrators. The hospital is owned and run by six churches. We met the pediatrician Mbala who is also responsible for the nurse education. They also have a program for nurses who want to specialize.

We saw the prosthesis workshop, a combined carpenter’s and mechanical workshop. We walked through the orthopedic clinic. It’s always full since the biggest road in the Congo, Kinshasa-Matadi, runs right outside the hospital. There are a lot of traffic accidents. Nobody who’s ever travelled on the Congolese roads wonder about the amount of accidents. There are many reasons. A lot of cars are in very bad shape. There is vehicle testing, but it’s not particularly thorough. People travel in and on cars as they find space. Today we saw cars driving along the road with people sitting on the bonnet or on top of a huge load with their legs dangling on the sides, or standing in open doors or on the back of vans. And they drive fast. When they drive it seems they have a watch but no time. You have to have car insurance by law but the insurance companies seldom compensate for personal injuries. The drivers have to pay it themselves. Everyone has to pay for the hospital stay.

Food and laundry for the patients are taken care of by their families. There is a kitchen where the families can cook. In total the hospital has 400 beds, but it’s never full. A lot of people can’t afford hospital care and hence a lot of people die from curable diseases. They simply don’t have money for health care. Another reason is that the government has separated the country into health care districts and built health care facilities in different places. The catchment area has therefore decreased in size and only the more complicated cases end up at IME. They also had an airplane earlier that took care of the longer transports.

We saw the dentist’s office with four treatment rooms which is a gift from the Swedish Missionary Church. We then walked through the physiotherapy section. The manager was partly educated in Sweden at Lundsbrunn and spoke some Swedish. The physiotherapist Eva Mårtensson has worked with rehabilitation here. She also worked as a pilot and a minister in the Congo.

In the laboratory they take pride in having the only blood bank in Bas-Congo. In the children’s ward Barbro handed out cuddly toys to a lot of children and left the remaining toys to the head nurse. There are five operating theatres and they perform six operations per day. Sida and the Swedish Missionary Church built and equipped a house for manufacturing of pharmaceuticals during the end of the 80s. The manufacturing had to be closed down due to lack of money during the war and the lootings during the 90s. They have plans to re start production shortly. It seems they should be able to outsource this business. I believe that the church needs entrepreneurs who complement the church’s activities. The church is not good at running all activites. A reflection after the guided tour at IME by one of the entrepreneurs, a ’knalle’ from Sjuhäradsbygden.

After coffee at the guesthouse we started our journey towards Kinshasa. We had 220 km ahead of us on a good road and we had decent temperatures today as well. We paid road fees at two toll stations. We were stopped by the police four times. At one place the police was reinforced by the military; young boys with automatic weapons. They wanted $30 to let us pass. Our drivers know how to handle these kinds of situations and they bargained the bribe down to $1.75. We ’knallar’ thought they struck a brilliant deal. They were rewarded with applause. We passed about 20-30 cars standing along the road. Reparations are carried out where the car breaks down. Wherever the cars stops the car is repaired. The reparations are usually tire changes, but they also repair engines, gear boxes, drive shafts and other vital parts. On a downhill slope a large truck had lost its trailer and it was blocking the entire road. We just about managed to pass. We were grateful that we weren’t there when it happened.

Further along the road a truck had landed upside down. The driver was taking a nap on top of the car (i.e. the bottom of the car). He obviously took the accident in stride and was patiently waiting for the tow truck to arrive. You also see a lot of dilapidated cars in the villages, often parked in the front yard. We asked a Congolese why they don’t get rid of the scrap metal. It turns out that people like to show that they or their parents or grandparents once owned a car. One more question answered. I am convinced that there is a considerable demand for car repair shops. The journeys would definitely be more pleasant without all these stops. The philosophy to drive for as long as the vehicle moves forward is not to be recommended. We see the proof of this on the Congolese roads. It’s better to service the car according as was intended by the manufacturer. I hope that the Congolese start thinking this way soon. As far as we were concerned we suffered flat tire number two during our journey. I’m sure there is room for many entrepreneurs in this field.

Another observation during the trip was a large herd of cattle. Hugo, who likes to joke, claimed that he counted all the legs, divided them by four and came to the conclusion that there were 200 animals. Hugo’s jokes are often spot on and I’m sure this one was too.

1 thought on “The IME hospital”