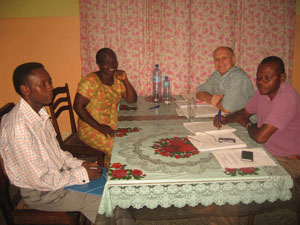 The day has been dedicated to the individual consultations with the new entrepreneurs. Bernt, Julienne and Yapeco have been in charge of the interviews. The less Swedish we use in class, the quicker our students pick up the course material. By now, Julienne and Yapeco know the important parts, and they take over more and more. The tenth entrepreneur arrived at half past five, and the interview was done shortly after six o’clock. A common feature in their response to the course material was that it is easy to understand and contains a new way of thinking. ‘You give us the opportunity, we have to make use of it.’ Some of them expressed gratitude for being chosen. They are going to hand in all the written exercises by January 27th. Bernt´s overall impression of the new entrepreneurs is that they know what they want, are target-oriented and seem to be stable people. Myself, I have used the day for paperwork. There are many documents to write in order to make everything work. The pack of 500 sheets of A4 paper I brought will probably be used up by Friday when it all has to be completed.

Mama Matila invited us for dinner at her restaurant. She served antelope, manioc, rice, sweet pepper and sweet potato. The meat and the sweet potato were the highlights, but the rest of the meal was delicious as well. Mama Matila is a true entrepreneur. She started the restaurant when she was left a widow, many years ago. Now, she has several employees and a much frequented establishment. She was fully occupied doing the cooking while we had our dinner, and we had to enter the restaurant kitchen to be able to see her and thank her. Her business gave her the means to pay for her son Oscar´s university education. A fine example of how a crisis can be the starting point of something new.

Yesterday, I wrote about Julienne´s fields outside the Nsanda village. I had misunderstood the size of her property, due to the limitations of my apprehension no doubt. Instead of 150 hectares, she owns 315 hectares of fertile Congolese soil. It can give two harvests during the rain period. Add an irrigation plant, and you get up to four harvests a year. What an amazing natural resource, the Congolese soil! In Congo there are millions of acres of fertile soil that are not cultivated. In 2003, Julienne and her husband visited Sweden. In their absence, the man who they´d employed to take care of their fields, sold their farming equipment and embezzled the crop profits. He caused them a loss of $30 000 and put them in a series of difficult situations due to his disappearance. Since then, the fields have been lying uncultivated, as Julienne and her husband have not recovered financially. The Swedish proverb ‘När det regnar välling har den fattige ingen sked’ (‘When it´s raining gruel, the poor man has no spoon’) goes for Julienne, as well as for many Congolese. Please, let us give her and many others a ‘spoon’.

Congo is presumably one of the richest countries in the world when it comes to natural resources. From my point of view, I don´t think the Congolese have any use for the kind of aid that make them passive bystanders. Instead, they need the tools that can enable them to transform their resources to prosperity. Julienne’s fields of 315 hectares could support several families, maybe as many as 50 or more. We are drawing up a plan of how they can make their fields profitable again. Julienne has talked to an agronomist who has done an estimate. We believe they should start on a small scale, and little by little grow the business through their own efforts, that is, putting aside some of the profits in order to make investments. This is a project with huge possibilities.

Today, Bernt had to ask Yapeco to contact Dr Philippe on his account. Dr. Philippe prescribed the same kill-or-cure remedy to Bernt as he previously gave me. It´s not as easy as you might think to get the stomach to work as usual again. We hope to be ok when we go home to Sweden again, Sunday night.

To be thoroughly rested, we are staying one day longer than planned in Matadi. We are leaving for Kimpese on Saturday after breakfast, and will then continue to Kinshasa on Sunday morning. Yapeco will be driving us the whole distance to the airport. Yapeco had wanted to meet us at the airport when we arrived in Congo, but we felt sorry for him for having to drive a total of 370 kilometers to pick us up. That is why we asked Nzo Binati to set up the trip from N´djili to Kimpese. The trip to Kimpese almost cost us our lives, see an earlier blog, and it cost us $200. The usual fare between Kinshasa and Kimpese is $10. We used the car and driver for some short transports in Kinshasa, so a bill of somewhat more than $10 would have been ok. But with such an unfair pricing, we will not be using Nzo Binati´s services any more. Next time we will stay at another guest house. Nzo Binati charge more for food and lodging than a Swedish equivalent. Through our friends in Matadi, we have found more beneficial solutions.

We are not going to repeat the mistake to say no to Yapecos generous offer to take care of us as soon as we land in Kinshasa. Julienne said ‘You are not to use any taxis, Yapeco will drive you, Yapeco is God´s gift to you.’ This almost brought tears to my eyes. Afterwards, we´ve understood that Yapeco was a little offended when we said no to his offer to meet us. He didn´t understand why we didn´t want him to fetch us. Cultural differences cause us Swedes to make stupid mistakes! But by now it´s all sorted out, luckily.