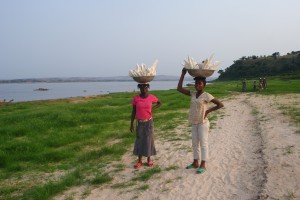 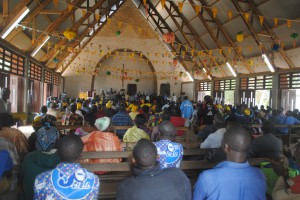 At the Thursday it was an election for the churchpresident. This was being done behind closed doors and therefore there were no observers, which was my title there, allowed and I found myself once again having some sparetime to spend in the peaceful cosy house of Gunnel. This is yet another thing that is different from Sweden. At home it´s often the case that no one wants to be in charge and it can even be difficult to find members to the board in churches or other compounds but here it´s almost like a real presidentelection with campaigns with propaganda, bulkSMS. At about four o´clock I started to here some blow whistles and singing and I and Pauline went to se where the sound came from. The resource was the neighbours that was celebrating the result from the election. It was the current president that was chosen for another period and because the neighbours were his family this was obviously good news for them. They where singing and dancing and their happiness had effect on me too so I joined them in their celebrations and danced, clapped my hands and sang with them.

The finalcermony was supposed to be hold on the thursdayevening but because this with organising and keeping time isn´t really the congoleses best side it was hold on the fridaymorning. It was then supposed to start at half past eight, in the end my watch was showing half past twelve when we took our seats in the church to begin the ceremony. Meanwhile we had been waiting I found a englishteacher that spoke really good English. It was actually the first englishteacher I´ve met here that speaks well at all. At two o´clock the church was finished and we went home to gunnels house to eat some dinner and rest before the journey back home the day after.

Then on the saturdaymorning we went to Matadi again. Me and Yapeco were joined by a nice reverend from the synode and together with their good company and the beautiful sights outside my carwindow I had a very pleasant journey. At five o´clock in the afternoon we were safe back in Matadi. I can conclude that it have been a wonderful week where I met many lovely people, both Swedish and Congolese, seen a lot of Congos countryside and had a really peaceful and relaxing time. Now I look forward to a new week with englishteaching. To be continued…

2 thoughts on “The last days in Luozi”