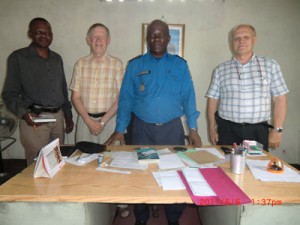 Early in the morning there was a power failure and the electricity stayed away for the rest of the day. I kept on writing on the computer as long as the battery lasted, and when there was nothing left I quit working. On a national day, you are supposed to be free and celebrate, but we hadn´t planned any time off, our agenda was quite full. It was probably for the best to relax a little, even though it´s hard to take it easy when there are urgent tasks at hand. We don´t take any meals here at the L’Odinae Guest House. It´s a good place for sleeping, but access to electricity and Internet could improve. Gösta is nice and lends me his mobile broadband. And he assists us with transportation as well.

Kinshasa is a big city with vast distances, lots of traffic jams and many critical moments. If you can drive in Kinshasa, you can drive in any city anywhere in the world, Gösta claims, and I believe him 100%. On the whole, it takes go-ahead spirit, proficiency and a generous helping of courage in order to use your car in this chaotic traffic. The police has a hard time trying to create a little order in the largest intersections. There are a few traffic lights but they don´t work, probably due to the many power failures. Many of the road-users apply the principle: ”Let´s give it a try!”. A steering wheel and an accelerator pedal are amazing in the way they change a person´s behaviour. On Sunday, Gösta Luboyi will go back to Haiti where he works for the UN.

We had breakfast at a true oasis, located right in the middle of Kinshasa. The place is called Centre des Handicapés Source de Vie and is a catholic establishment. Many of the employees have functional disorders in one way or another. After breakfast, we visited the Kinshasa and Bas-Kongo police commissioner, Colonel Celestin Bengama, who is also a good friend of Yapeco. He expressed his appreciation for our work and our visit. We thanked him for supplying a car and a driver when we arrived on Friday, and we gave him the New Testament in modern English and a pen. He said that he wishes to help us with transportation also in the future, and that he considered safe transports to be his contribution to our work. We fully understand that this is a valuable contact for us. Then we went to a machine store. Gösta was going to meet director of the church Edi Diafuanakana to discuss the issue of the generator in Luozi. The rest of the national day of Sweden went by without any more efforts on our part.