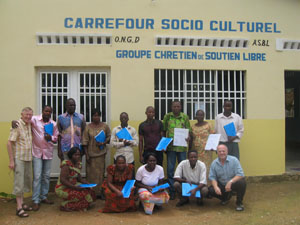 After the daily getting up, washing and eating breakfast it was time to take a walk to the Youth House and start a new group of entrepreneurs. Yapeco had notified everyone that the course would begin at 9 o’clock. We had just got indoors when a violent cloudburst came on, and everything and everyone outdoors got totally soaked. Four of the entrepreneurs had arrived before the rain started, and it took at least an hour before the last one showed up. The delay was probably due to the weather. I participated during the first hour, when we introduced the project. Yapeco opened the gathering with a prayer. Bernt, with Julienne as translator, and Yapeco then took care of the instruction. It is fantastic to have two Congolese lending us a hand, especially considering their solid experience in their respective fields. Julienne is a skilful educator and Yapeco a capable entrepreneur. Both of them are competent leaders with an extensive network, and not least – they are enthusiastic about our idea.

Yapeco had received about 25 applications this time, and he had picked out 10 entrepreneurs to the course. We believe that 10 people make a large enough group at the moment. The participants belong to different churches in Matadi. We also believe it is for the best that the recruitment is done within the church. We are aware that there is decency and honesty outside the church as well, but we think that our chances of finding these characteristics are higher among church members. The group is comprised of four women and six men, and they are between 25 and 35 years old. Later, we will receive a complete Curriculum Vita and a thorough account of their business proposition and how it will be realized.

When they had finished two out of five parts of the course material, the gates of heaven were again opened wide and the rain came down in buckets. Nobody could hear what anybody else said. The room has no inner ceiling, but a ceiling probably wouldn´t have done any difference on this occasion as the pouring rain was hitting the almost entirely flat tin roof. All we could do was taking it easy and start on the exercises. There are a lot of those in the material. And we took a break, with lemonade and a bun. Both assignments could be performed without any detrimental influence of the loud noise. To adjust to the circumstances and do what can be done, not falling into the trap of being passive is an important lesson for entrepreneurs. It is an important lesson for every human being. An hour later, the heavenly water came to an end, and the oral instruction could be resumed and we continued until 1 o´clock.

In the afternoon, we went to the Nsanda village, about 20 kilometers from Matadi, on the other side of the Congo River. Seven kilometers outside the village, Muditu has 2.5 hectares of peanuts that he wanted to show us. Yapeco drove the car. He managed to wheel us along the seven kilometers of wet mud road through elephant grass, and we never had to leave the car to push it out of a ditch or to help him tow it. When we arrived at our destination, we were met by the joyous Josephine, Muditus wife. She was weeding the very well-tended fields. It has to be done one time during the three months period of growth. Usually, they employ someone to do this for them, but this year, they couldn´t afford that. Josephine worked the fields alone while Muditu was attending a democracy conference in Lisanga. In Sweden, we would probably have prioritized differently. We would have been forced to, I guess. Josephine and Muditu have a small brick house with a hipped roof in the village nearby, where they stay when they work in the fields. It is too expensive to go back and forth to Matadi every day. The house has dirt floors and three rooms. No windows, only holes in the walls that you open if you need light. Josephine was going to stay there for slightly more than a week. We learned the hard way how to walk on wet Congolese soil – obviously barefooted, like the Congolese. But we hadn´t taken off our shoes, and they became huge blobs, the mud sticking to us as thick as thieves. Back at the Guest House, we spent half an hour taking care of our poor shoes, philosophizing upon the optimal phase of Congolese earth – is it the dust of the dry season or the muck of the rain period? After all, we prefer the muck.

We went to Nsanda, where Julienne and her husband own a house. They haven´t been there for several years now and when we got there, there was another family living in the house. Julienne went inside to find out who had moved in. She had no idea who it was. That´s life in Congo. In front of the house her Toyota jeep was parked. It was left to Julienne by Alice Sandblom, a missionary. It is nothing to write home about, but Julienne wants to have it fixed up. Alongside the jeep stood a BM Volvo tractor which they bought from a farmer in Asklanda. In Nsanda, Julienne and her husband also owns 150 hectares arable, fertile soil. A very interesting project that deserves attention and investments. Do you want to take part in it? Please, contact us!

At dinner, principal Matondo came to see us. She is responsible for 100 pupils, who for some reason or another have dropped out of Secondary school. Her school is equivalent to our municipal adult education, and it lasts for three years. They have been given seven sewing machines by SIDA and the Swedish Covenant Church (as a part of the SEK 13 million development aid to Congo). She wanted us to take over the education of her pupils when they graduate from her school. Today, many of her pupils have nothing but unemployment to look forward to. We might be looking at some future sewing manufacturers here. This is a possible future expansion of our present project.