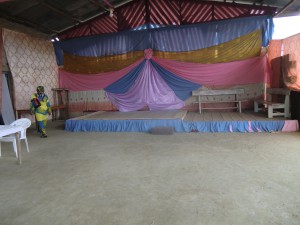 The Clinique Church in Matadi

President Joseph Kabila held an estimated speech to Congress and the nation on Wednesday. He talked about three problem areas where actions must be taken: corruption, rape of women and individuals who enrich themselves at the expense of others and the nation. He condemned corruption in strong terms. It is forbidden in the DRC’s law, yet it is widespread and permeates society in many areas. It has become a culture and hardly anyone react or have that opportunity to react. People accepts the system, is silent and suffers. We’ll hope that there are effective actions behind the president’s words, and that people listen and react against corruption.

To tackle structural problems in a society where the rule of law is not prioritized is not easy to master. When officials use their position to wrongly acquire money from others, or when they are plain and simple incompetent, this creates uncertainty and takes away the power from many good initiatives for change. Poverty keeps it’s grip on the people. The president promised to appoint an adviser on corruption. The large amount of rapes on women must also be stopped. It destroys the women and shatters the families. And there must be a vigorous control of those individuals who enrich themselves thanks to their position. Many congolese appreciated the President’s speech, and his frankness. It bodes well for the future of the nation and the goal of development.

We started the day by visiting the BGFI Bank. We discussed the loan financing to entrepreneurs and the financing of an ECO house. We went through the conditions of security and interest rates. After the bank we visited Pastor Nsumbu Ngoma and his wife in their church Clinique. We had a chat with them in their church that were not much more than a roof, concrete floors and benches.

In the afternoon we visited the police chief of Bas-Congo, Vumi Bahelele. Samuel Nkailu was also there. Vumi told us that he is also a farmer. He has 7 acres where he will now sow soybeans. We talked some farming with him and Julienne discussed some legal problems. He was a cheerful man who was nice to visit. Before we parted on Vumi offered orange drinks that tasted well in the heat.