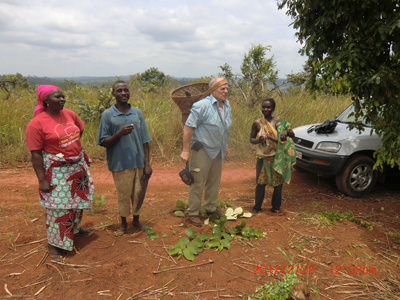 Today, something unusual took place: Bernt rose up before me in the morning. Maybe, he had been hit by the message of his own sermon of last Sunday, about leaving the old patterns and think outside the box. And maybe he will realize that “the early bird catches the worm”. For breakfast we tried a new combination of porridge and sliced avocado, that Bernt had bought yesterday from an itinerant saleswoman. It was a new taste, and it was quite good. The day was reserved for a trip to Nsanda. First, we visited the cultivations of Muditu´s and his wife Josefine´s. We also went to their nice little house in the village Kiwelo. Muditu and Josepfine has 2,5 hectars of manioc. Between the manioc plants they have peanut plants, that had been harvested last growing season. Muditu counts on a harvest of 10 tons of manioc. Furthermore, they have 1 hectar of beans, and another 1,5 hectars of peanuts. According to Muditu they have not been hurt by the drought yet. Quite surprisingly, we met a cow who had been standing behind some bushes, peering at us. Judging from her behaviour, we understood that she had never before seen a mondele. Bernt wanted to take a close-up of her, but Muditu warned him and Bernt took a more distant photo.

Then we went to Kiwelo, where we met Josephine. She lives there all week and takes care of the fields. The house consists of two rooms, one bedroom and one livingroom. The food is cooked on a simple fireplace outside. There are no windows, only shutters that you open when you need light, and there is no electricity. When we left her, she took a basket to go harvest peanuts, and Mudito joined us to Nsanda and then to Matadi. I think this is called division of labour in Congo. We noticed that there were two tractors in the village. One of them was an older Fordson and it seemed to work, and the other was one of the larger models of SAME. Judging from the tires, it seemed to be quite new, but it has probably just been idle for some time because one of the rear tires was flat. An expensive resource just standing still, to no use for anyone. Sometimes it is difficult to understand that the Congolese can´t see the resources they have, just around the corner. I suppose that it wouldn´t take much to get the SAME tractor to work again.

We continued our journey by visiting the pharmacy of the Nyambudi´s in Nsanda, and their employed pharmacist Angéle. Anyone can open a pharmacy in Congo, but it requires a lot of permits, and the person who man the pharmacy must be an expert. Angéle is a trained nurse, and the pharmacy is ordered, clean and tidy.

Then we went to Nyambudi´s house in Nsanda. It is a simple house where they live when they look after the Nsanda project. The house has three rooms, and electricity but no running water. The furnishing consists of one table with two chairs + the chair of a neighbour. The sleeping place is mattresses on the floor. There are no windows, only shutters. The house provides shelter, nothing else.

Then we were off for the Nsanda project cultivations. Clement and Jimma, the driver, Bernt and I went in the renovated Toyota jeep of the Nyambudi´s. Julienne and Yapeco went in Yapecos Toyota, a jeep of a newer model. It´s magnificent that the old jeep could be made to work again. The 17 km ride from Nsanda to the cultivations was ok. It was sad to see the fields. They really suffer from the drought. The manioc has reached halfway of it´s normal growth, but it will be alright if there is rain, and can at best be harvested at the end of the year. The peanut plants were alive, but there wasn´t anything to harvest. If there will be rain there will probably be a small harvest. When I am writing this, it is raining for the second night in a row. That´s lovely. A normal harvest of peanuts is about one ton per hectar, and the price is one USD per kg. We would have harvested 5 tons if the growing season had been typical. The soy plants were completely wasted. We sowed 3 hectares, and that would generally give a harvest of 3,5 tons. We had a contract with a factory that would have paid us 5 USD per kg. Now, we need to clear the fields from weeks. Bernt and Clement started right away.

We took a walk down to a rather deep valley, where there is a water source. Our driver went ahead with his machete and cleared the way. Bernt and I walked behind. We were alright as long as we were walking downhill, but the walk back was almost fatal for us mondele. The heat was pressing and the uphill much steeper than it had seemed before. The driver was totally unaffected by the exercise, he even had a jacket on. Our plan for the water source is to construct an irrigation system for some of the fields. Right now, we plan to prepare another two hectars close to a small river, where we can arrange for irrigation right away. The crop will be piripiri and beans. 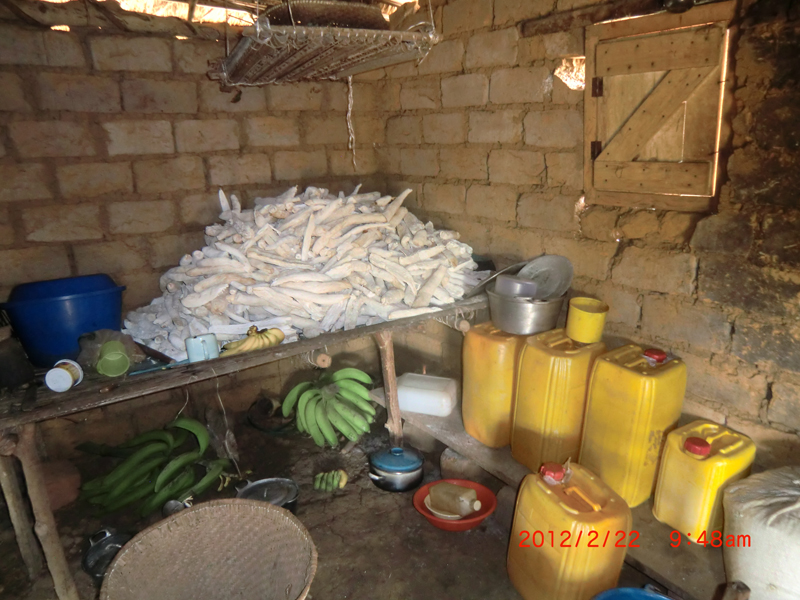 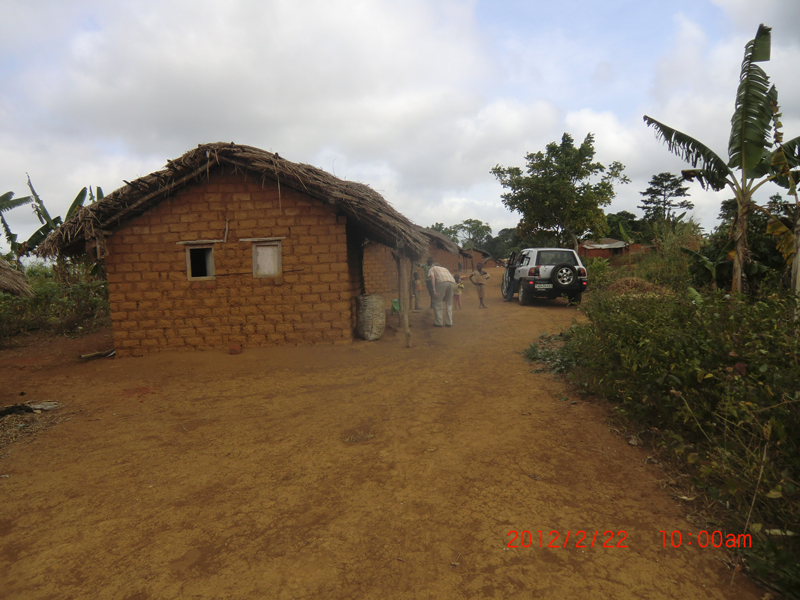 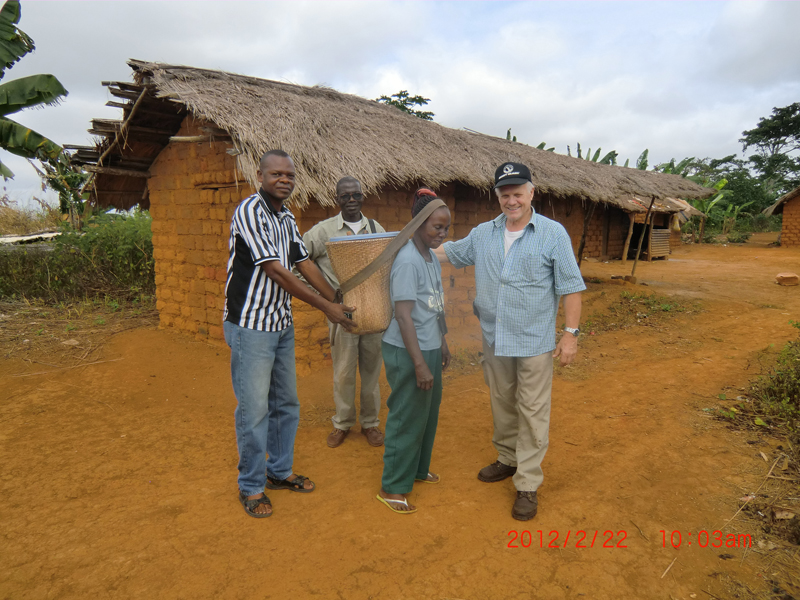 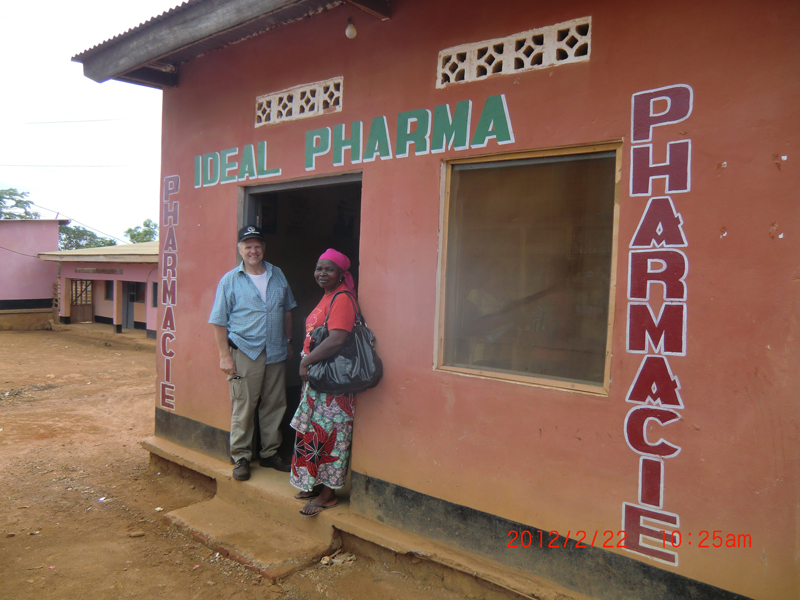 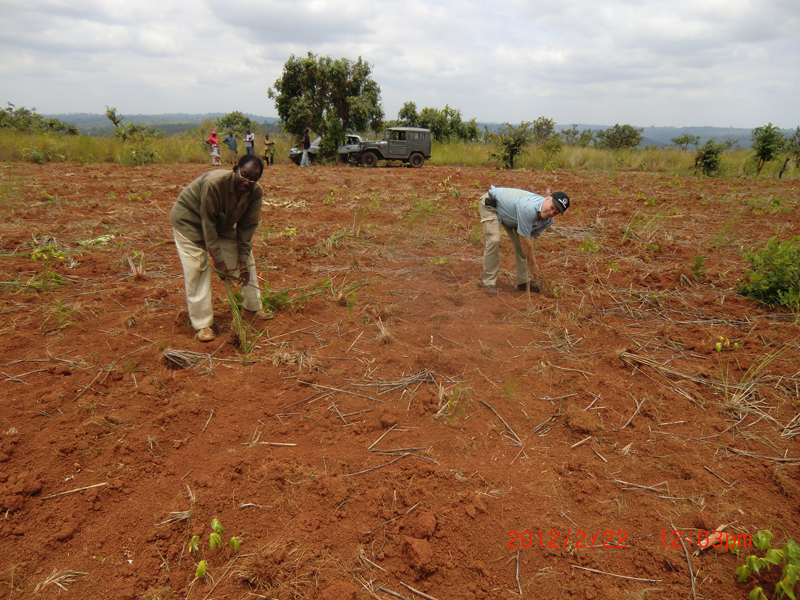