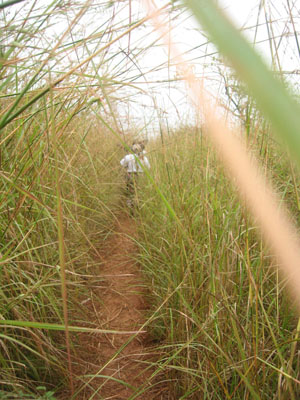 The other day we came across a group of enterprising young people. They had taken the matter into their own hands and started a rescue action for their own street in Matadi. It is a commendable initiative. The need is huge and many ought to follow their example. Of course, the boys wanted to get paid for their trouble. One of the boys was assigned to job of collecting the toll, and he was equipped with a bricklayer´s bucket for the purpose. They stopped us, but Yapeco managed to negotiate suspension until we returned. They were satisfied with the deal, and on the way back we put our contribution in the bucket.

This time in Congo, the temperature is more agreeable compared to our earlier visits. Now, it fluctuates between 20 and 25ºC during the day, and this makes you feel much better than if it is around 30 to 35ºC. The nights are cooler and it´s easier to sleep. We had a dense drizzle the other night, even if it´s supposed to be dry season. A substantial amount of water was running from the roofs. The humidity seems to be high.

Today, we had a refresher course for the January 11 Group. In the morning, we went through how to make a sales budget, investing, results and liquidity. They needed the run-through as they hadn´t completely understood the systematics of it all. We used the budget Kunda had drawn up as an example. He will start a chicken farm and broiler breeding. We made a few adjustments and additions, but all in all the budget was alright. Even if the hens don´t lay any eggs for the first six months (it takes six months for a chicken to mature), Kunda won´t have any liquidity difficulties during his first year unless too many unexpected negative incidents occur. He even has a margin for some unexpected events. In the afternoon, Bernt and Julienne had individual talks with the entrepreneurs. I engaged in desk work and banking transactions. We opened a bank account in the ProCredit Bank on behalf of the Nsanda Group. Jean Clement Nyambudi will be the Finance Director and Julienne will be Managing Director of the Group. Thus, they´ve got respectable titles too.

When we were done for the day, we had also done our last day in Matadi for this time. We have largely managed to do what we had planned. Thanks to the temperature being friendlier to Nordic guests, it has been easier to work. To sum up, we are quite pleased with the results so far, but you never know what the future holds. Each and every day, this country offers us new experiences and surprises. As recently as tonight we made a new acquaintance. Yesterday, Clement got sweet potatoes from a good friend in Kwakwa. Tonight, he cooked them and served them for supper. They lived up to their name and were really nice.