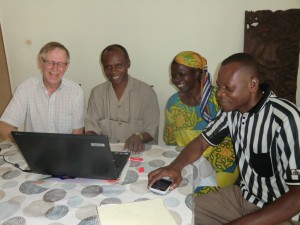 After a proper porridge breakfast on Nzo Binati we had a meeting with the director of the CEC Mission Church, Edi Diafuanakana. We presented the material on entrepreneurship that Focus Business School, abbreviated FBS, has developed. We have felt that our material needed a supplement of business ethics. Simply put, it’s about how the entrepreneur deal with the world around them, and how to be a leader.

Åke Nordquist at FBS has contributed ideas and knowledge that we are putting into our material. FBS’s goal is to let all churches get the message about entrepreneurship and to get church leaders to act on that knowledge. The idea is that a few members of each congregation should become educators in entrepreneurship and pursue these issues. If you have internet access, please read about the project on the FBS website, www.fbsi.org.

Later in the day we had a meeting with one of our lamp sales persons. He sells in Kinshasa. We started with an inventory of his stock. A large amount of the stock is stored in various shops and department stores. We visited one of them, a very fine one called “Michael”. His reported sales had been $4,192 which he gave us in cash. Some lamps were missing from the warehouse. He will sort that out. But sales have been far too slow and we discussed actions to boost them. We set the goal that the entire stock should be sold by the end of the year. It is a goal that will require hard work.

After the meeting, we took a taxi the 200 kilometers to Kimpese. We arrived a quarter to nine at night. We are staying at the house of the Nganga and Therese. They are alert and friendly seniors who have always shown us great hospitality. They have a nice house with air conditioning. When our bags were inside, Therese suggested that we would gather in prayer and thank God that our trip went well. It is not difficult to accept such a proposal.

Road safety is not what it should be and speed is high on the roads. The taxi we got hold of had seen its best days, and the best before date was passed long ago. Just before we arrived, thje car was stalling and had to be pushed to start again. Helpfulness is abundant here. Some guys who lived in the street helped us to jump-start the car. God’s protection is a necessity, and it feels natural to thank for it. Therese led the blessing and then we had a tasty supper.

Sleep has been good in a temperate room and I am using the morning hours to write down this blog.