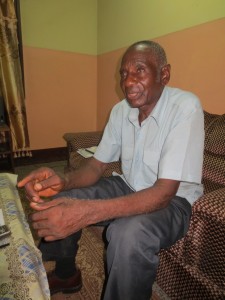 Samuel Nkailu speaking about his activities

On Thursday, Samuel Nkailu came on a visit. It was a happy reunion and we had many greetings to him from Sweden, both written and oral. Samuel has just turned 79, but he is he always has been. He is busy all the time. There are a lot of activities in the Youth House, for example courses in sewing. The Christian support group has opened restaurants at two hospitals in Matadi. Six days a week, they cook and sell food to the patients at a low price. Everybody works as volunteers. Matila’s son Oscar Muller, who is a parliamentarian in Kinshasa, gives a sum corresponding to 1000 SEK to each restaurant every month. He is exemplary. The world need many such politicians.

On Friday, Yapecos wife Augustine came to visit us. At 10 o’clock Yngve and Yapeco went to the bank. Yngve needed cash for the rest of the trip. It took some time to get cash, therefore we were a bit late for the meeting at Congo’s first university, University Libre, with 1250 students. Yapeco apologized for the late arrival and everyone seemed happy, anyway. We were received by the church director Paul Tekasala and got to meet five other people of staff, among them a young and handsome rector.

Yngve starts every presentation with a positive approach and I think he is a good presenter. Julienne Kukangisa interpreted him for the first time on this trip. It’s good that she interprets from Swedish. Yngve underlined that the whole enterprise began in Matadi with his community college friend, Samuel Nkailu. He talked about MSG and how it consists of entrepreneurs who wanted to share their experiences. Yngve stressed that Sweden’s welfare depends largely on entrepreneurship. And he talked about the three tools of MSG: education, start-up loans and follow-ups, and the principles: honesty, transparency, control and results.

Yngve stressed that it is important that the educators are in contact with the lenders / banks and that the loans are provided at reasonable costs. The lending of money from Sweden has been too complicated. It would be better if the lenders are based in Congo.

Then, a newspaper waited for us to do an interview. They took many photos.

We drove for a while in Matadi, which is a quite large town, where the houses are situated beautifully on the steep slopes. We were fetching Jean Pierre who participated in MSG’s first course in Matadi October 2010. He is a teacher at the next university we were going visit today, I.S.C. Matadi, with 2,000 students and three faculties: social and customs administration and economy. They also have a basic entrepreneurial education they now want to develop. We seemed to be coming at the right time.

Yngve now told the story in a slightly different order, but just as good. This rector was even more enthusiastic. Yngve spoke of how the university increases the value of the course and how important it is with professional teachers. At both universities Yngve talked about the possibility of conducting a course already in the fall with French-speaking teachers. Participants should consist of entrepreneurs and teachers. It is important to include practical excercises. The training should be a mix of theory and practice.