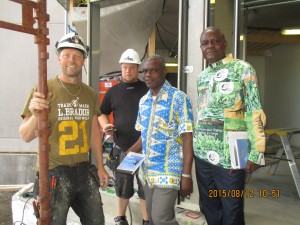 Emy and Joseph are checking some building workers

We started with Hökerum Bygg och visited a construction site in Ulricehamn where we saw a building that will be 14 stories high. The company started in 1967 as a one man company – one man and two empty hands. In 1990 the company was sold to new owners, with Sigvard Ståhl as the main owner and CEO. At that point the company had 60 employees and a turnaround of SEK 100 million. Today the company has 100 employees and a turnaround of SEK 800 million. They produce 400 apartments per year and use pre-fabricated cement. The reason why the turnaround is so high in comparison to the number of employees is that they contract a lot of sub-contractors such as shell assemblers, plumbers, ventilation assembler, painters, floor layers etc. To grow you have to have your own capital that is generated through profit. Some of that profit is set aside to be invested in new initiatives. Today Sigvard is the senior adviser and his youngest son, Victor, is the CEO.

In the afternoon we visited Enitor Plast. Karl-Arne Karlsson, founder and CEO, received us.  After working in a plastic company for 16 years he started his own. He rented a 150 m2 facility and started with a single machine that produces plastic. In 1995 he built a new factory that measured 1000 m2.  In 2000 he doubled the size of the factory and had 8 employees and a turnaround of SEK 12.5 million. In 2011 he lost half of his clients as they moved their production to low cost countries. The number of employees was reduced to five. It has taken the company four years to get enough new clients to reach the same volume as before. Karl-Arne emphasized how important it is to have good co-workers, listen to good advice from friends, have two or three advisers and to make sure that the family is onboard as being an entrepreneur is a lifestyle. They have survived hard times by keeping their finances in order.