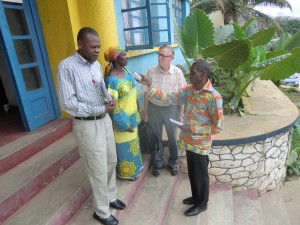 Meeting with a journalist outside the Mayor, s office

After breakfast, we visited the mayor of Matadi, Jean-Marc Nzeyidio Lukombo. This is the fourth time we visit him and we are starting to get to know each other. Today we were let in at once, which was good. Today’s schedule was fully booked. After the customary courtesies and compliments from both sides, we presented some ideas and innovations concerning biogas plants for households, ecological housing and sustainable waste management.

When it comes to garbage disposal, we will check with the University College of Borås what it takes to start higher education in the recycling and waste management, and how to put up a consultancy. The mayor’s proposal is to send one student from each of the three towns Luozi, Kimpese and Matadi to Borås. The city of Borås consider themselves to be world leader in taking care of garbage and converting it to different types of energy. Borås University College, Borås Energy – the municipal energy company – and the Technical Research Institute of Sweden (SP) cooperate and they sell training, expertise and consultancy worldwide. There is definately an interest here in Congo to do something about waste management.

We had a frank conversation, but Jean-Marc also wanted to pass the questions on to the Minister of Agriculture. He arranged a meeting for tomorrow with an advisor at the Department of Agriculture here in Matadi and he arranged a meeting with the governor. Lutelo Myller arrived during the meeting and invited us to his home on Saturday. Today he were going to Kinshasa for a meeting in Parliament. Vice mayor, an impressive woman with aplomb, was also there. After the meeting, there was a newspaper interview. Julienne talked to the journalist about the initiative.

Then, Yapeco brought us home. We had desk work to do, and he went to work at his office. At 4 p.m. we went to the Baobab church for a meeting with Pastor Edi Yavengi Diangitukulu. We presented the program on business ethics that Focus Business School has produced. Edi said: “You have come up with a new gospel.” Even though his words encourages us, entrepreneurship in itself has no saviour and is no magic bullet. Basically everything in entrepreneurship depends on the recipient and how he/she puts it into actions. The miracle can happen only when there is an individual with willpower and direction.

We talked about how to introduce this program to the various churches in Matadi. Edi and Yapeco promised to plan this. FBS’s idea is to reach all the churches. Within a few weeks, the churches should get a French version of the presentation. Hopefully we can arrange a two-week course for trainers in April next year. During the meeting, we were accompanied by two choirs who sat outside, on different sides of the church. Music and singing is ever present in Congolese life.

Then we asked for advise on how to repair the church bell. The clapper of the bell is stuck and can’t be released from the ground. They feel frustrated not being able to ring the bell before the service. The clock hangs 15 meter up in the air, in an impressive concrete structure, and it weighs 250 kg. We suggested them to use a sky lift to free the clapper safely. But they don’t think there is any sky lift in Matadi. Our next suggestion was a mobile crane with a basket hanging from the hook. There ought to be mobile cranes in Matadi and this will probably be the solution.