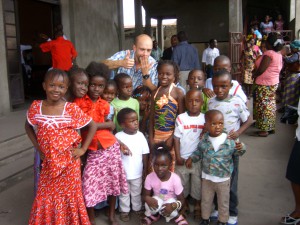 The children at Bandalungwa and Christoffer

Today, we had a peaceful breakfast at seven before we went to the Bandalugwa Church. We participated in the first service, beginning at eight and conducted in French. The leader of the service was a good friend of Yapeco; Jean-Rémy Makwala, a lawyer, and the sermon was held by Maurice Mazanza. There were not that many participants in the service at this early hour, and the service didn´t last for more than two hours.

The next service started at 10 a.m. As appropriate, there were presentations and greetings followed by applauses and lively gestures. Today, the technician had trimmed the sound system to the extent that no one could escape hearing every little thing. You could be led to think that the technician believed his god to be old and hearing impaired. This service ought to have been heard far and wide, considering all the open doors and windows of the church. But there were many posivite elements as well; the liveliness of the churchgoers is a wonderful part of the service. It really makes the service come alive. Afterwards, we greeted most of the congregation in hand and took photographs of the children. Christoffer especially was popular with the children. Then we went to Nzo Binati and had church coffee.

The rest of the crew did some sightseeing in town while I stayed at the guest house and made a few updates to our website and some other paperwork. At 3 p.m. Makwala brougt me dinner, prepared by his wife. Today there was grilled fish, rice, manioc, sakasaka and beans, a satisfying and tasty meal.

The afternoon was spent napping and doing other quiet activities, such as reading and discussing how to make the best use of our weeks in Congo. A church nearby was more active than usual, and was heard all over the neighbourhood. They had probably also invested in a powerful audio amplifier, you could hear the words of the singing. By 4 p.m. the sound stopped after having been going on since 11 a.m. Possibly, they had been celebrating something.